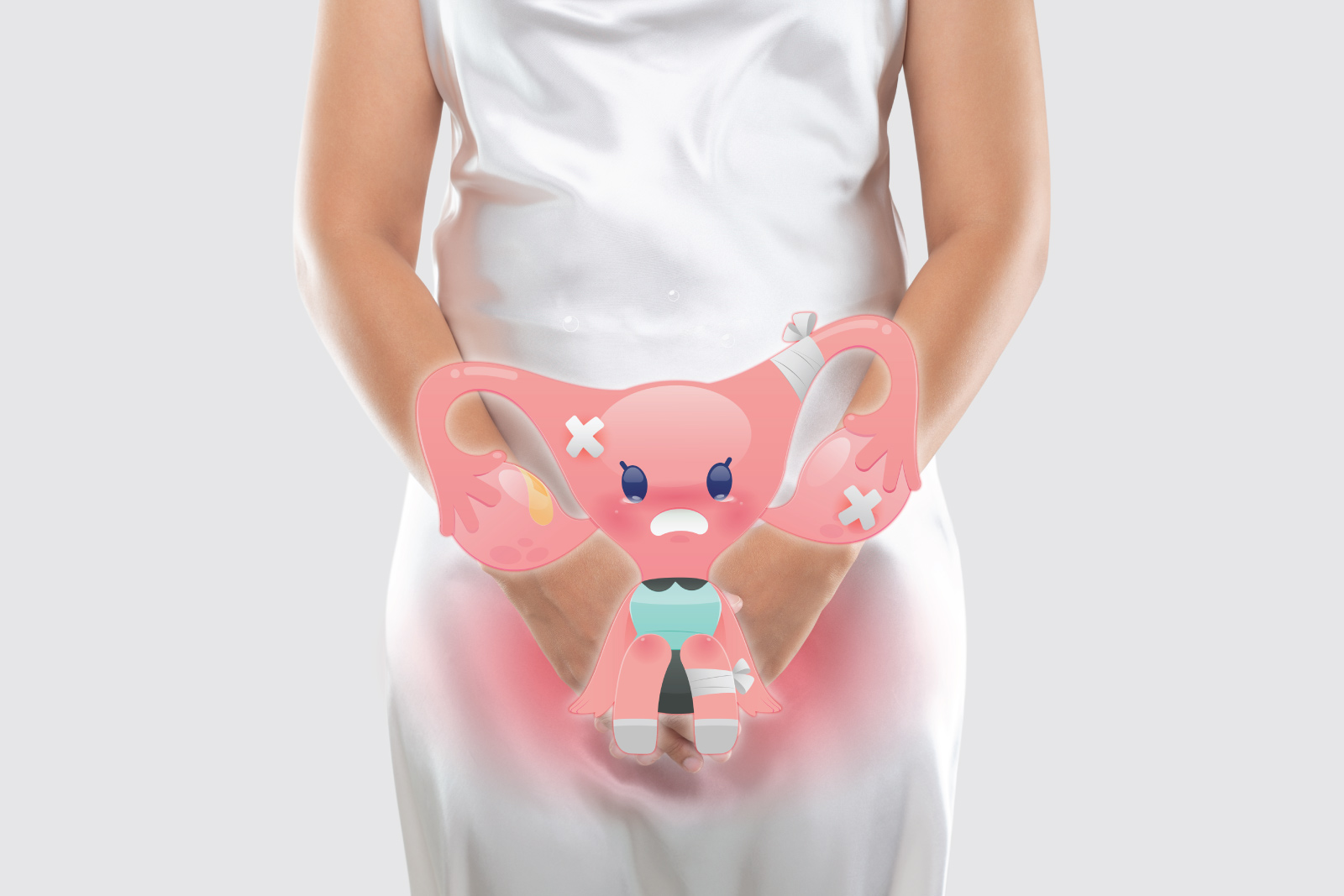 Uterine fibroids represent the most commonly encountered uterine tumors in women worldwide which can develop at the level of any segment of the uterus and can pose different problems in regard to the most appropriate therapeutic strategy especially in young women which deserve fertility preservation. Meanwhile in certain cases they can impede the development of a normal pregnancy due to their location or can show significant enlargement in volume during pregnancy due to the increased blow flow at this level. In all cases in which they induce the apparition of symptoms or impede the apparition or development of a normal pregnancy they should be removed. In cases in which the fibroids are located at the level of the uterine cervix attention should be focused on providing a correct and efficient postoperative healing. The aim of this paper is to review the most important aspects related to uterine cervix fibroid symptoms, treatment and postoperative healing, particular attention being given to Cerviron, a topic agent which seems to provide an efficient healing at this level.

Uterine fibroids represent the most commonly encountered uterine tumor among women worldwide which can be diagnosed at the level of any segment of the uterus; therefore, fundic, isthmic, cervical or intraligamentary fibroids have been described so far. When it comes to their development reported to the uterine layers, fibroids have been described to have subsero- sal, submucosal or intramural development; meanwhile in certain cases they can have a pedicle, being therefore more facile to be excised (1-4). When it comes to cervical fibroids, these represent rare eventualities, representing less than 2% of all fibroids; they can arise from the vaginal or supravaginal portion of the uterine cervix and can be developed anteriorly, posteriorly or central (5,6).

According to their location and dimensions, cervical fibroids can lead to the apparition of different signs and symptoms; therefore, while small lesions might be asymptomatic, larger lesions can create significant problems such as dysuria if the ureters are shifted or constipation if the rectum is compressed (1).

When it comes to the location of cervical fibroids, they can be developed in the supravaginal or vaginal part of the cervix and, as mentioned before they can be developed subserosal or intramural. In such cases pregnancy can be hard to be obtained; however, in cases in which it is obtained, the mode of delivery is usually through caesarean section especially if central cervical fibroids are present (2). In cases in which pedunculated cervical fibroids are present, they can protrude through the uterine cervix and can cause pain, vaginal discharge or vaginal bleeding (3,4). Meanwhile a mass protruding to the vagina can be encountered and can cause serious pelvic pain and sensation of pelvic pressure (7).

Whenever symptomatic cervical fibroids are encountered surgery should be taken in consideration in order to decrease the risk of complications and, in cases in which pregnancy is desired to increase the fertility. In all these cases the most efficient and desirable therapeutic strategy is represented by myomectomy. The procedure consists of isolated excision of the uteri- ne fibroids while the rets of the uterus is maintained in a good functional status, increasing in this way the possibility of fertility preservation and the rates of normal pregnancies. Although it is usually performed in a minimally invasive manner, the procedure of myomectomy can be associated with different postoperative complications, postoperative bleeding being the most fearful one. Meanwhile in cases presenting cervical fibroids the presence of a posmyomectomy scar at the level of the uterine cervix can be the source of other complications such as wound infection; meanwhile local inflammation can lead to the apparition of significant postoperative complications such as local pain or vaginal bleeding (3-7).

Once these aspects have been widely demonstrated, attention was focused on creating topic agents with intravaginval administrations with a higher capacity of reestablishing the normal vaginal flora. Therefore, creation of such a product which is able to re-establish a normal colonization at the level of the vaginal lining seems to be an effective weapon in order to prevent the apparition of preneoplastic and neoplastic cervical lesions. Meanwhile, association of other active principles which aim to provide a better healing of all the local microlesions which might further be considered as entering points for different species of viruses, bacteria and fungi seems to be an effective method in order to increase their benefits (18-20).

Although it is a minimally invasive surgical procedure, myomectomy for cervical uterine fibroids might be associated with certain postoperative complications such as bleeding or delayed healing. In order to prevent such complications a good local control of the healing process is mandatory. In this respect certain authors recommend local administration of topic products in order to diminish inflammatory response, to have a haemostatic action and to provide a more rapid healing. Therefore both pharmacological and homeopathic products have been tested with promising results. The most commonly investigated homeopathic agents which seem to influence the local postoperative evolution are represented by Thymus vulgaris, Hydrastasis canadensis, Calendula oficinalis and Curcuma longa. Therefore, Calendula oficinalis has been recognised as an active anti-inflammatory product which offers a more rapid healing of the skin and mucosal lesions diminishing in this way local pain and irritation decreasing in the meantime the local amount of leucocytes and favouring in this way the apparition of the granulation tis- sues; all these effects transform this biological extract into an extremely efficient product in order to provide a better healing of the uterine cervix scar. Meanwhile, a rapid cicatrisation at this level will diminish the risks of suprainfection with different germs which might be located at the level of the vaginal lining (8). Due to all these properties Calendula oficinalis extract has been also recommended after uterine cervix conisation. Hydrastasis canadensis is another extremely efficient homeopathic drug which has been proven to have a haemostatic and anti-inflammatory effect diminishing in this way the rates of postoperative vaginal and uterine bleeding. Moreover, it seems to have an antiseptic effect against microorganisms such as Entamoeba histolytica, Giardia lamblia, Gardnerella vaginalis or Trichomonas vaginalis diminishing in this way the risk of postoperative wound infection (9,10). Another impor- tant antiseptic product is represented by Thymus vul- garis extract, which seems to be particularly efficient against Escherichia coli, Klebsiella pneumoniaea, Yersi- nia enterolitica, Staphylococcus aureus, Listeria monocytogenes and Enterococcus faecalis; meanwhile to the antiseptic effect a strong anti-inflammatory one is ad- ded through it’s capacity of neutralising the free radi- cals which can be encountered at the level of the cervical wound increasing in this way the speed of the healing process. Interestingly, Curcuma longa, another homeopathic product seems to have a similar action with the one of clotrimazole while the adverse reactions are almost null (11,12). An interesting product which includes all the above mentioned homeopathic agents is represented by Cerviron, a vaginal topic which seems to provide an efficient postoperative healing process. Moreover, the product also contains certain pharmacologically active substances such as hexylresorcinol , bismuth subgallate and collagen. Hexylresorcinol seems to be particularly efficient as an antiseptic product due to its capacity of destroying the proteins which are synthetized by certain bacteria and to increase the local effectiveness of systemically administrated antibiotics; therefore shorter periods of antibiotic treatment and lower doses can be administrated if hexylresorcinol is added (13). Similarly to Hydrastasis canadensis, bismuth subgallate seem to be an efficient haemostatic agent, reducing in this way the risk of postoperative bleeding from the scar at the level of the uterine cervix. The last active principle of Cerviron is represented by vegetal collagen extract, which is wi- dely recognised for it’s reparatory effects at the level of any damaged mucosa. Thereofore, by adding it into Cervirson’s composition a more durable and efficient healing process is obtained decreasing this way the period of postoperative recovery as well as the postoperative discomfort.

Although rare eventualities, uterine cervix fibroids can be associated with significant signs and symptoms such as vaginal bleeding, pelvic discomfort or even dysuria or constipation; meanwhile they can impede the apparition and development of a normal pregnancy. Therefore, whenever they are diagnosed they should be removed through minimally invasive procedures such as myomectomy. However, due to their particular localisation, different postoperative complications such as wound infection, bleeding or difficult healing can be encountered. In order to provide a more efficient wound healing process, local administration of products containing both homeopathic and pharmacologic components such as Cerviron might be needed; therefore, such products seem to have a significant anti-inflammatory, anti-infectious and haemostatic agents reducing in this way the duration of the healing process.